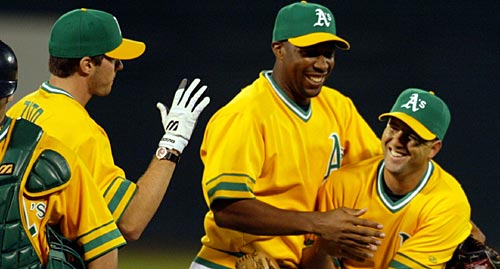 I’ll get to tonight’s game in a minute, but first I want to say a few things about Cory Lidle.

I considered Lidle one of my better friends on the team when he was here. There’s only a handful of guys that I could call up at any point, in-season or off-season, and just shoot the breeze, and he’s one of the few out of all the guys that I’ve played with. And I think a lot of guys considered him that way. I know Huddy was a big fan of Lidle, and pretty much everyone who ever played with him was, because he was like a kid. He played the game like a kid; he was just happy to be in the big leagues.

You get into a baseball clubhouse, and a lot of guys — especially the superstars — put stuff off on the umpire, the conditions, the weather, the coaches … anything that makes it seem like they can still keep their confidence. I notice that in a lot of guys. They want to maintain their confidence, so no matter what, it wasn’t their fault. And Lidle was the exact opposite, as I try to be.

Being a young kid and seeing Lidle come through here in ’01 and ’02, I was always impressed by him. You know, he had the No. 4 starter’s spot, but he didn’t take it lightly. He went out and shoved and always gave his all, and I think that’s something we’ll all remember.

I wasn’t actually playing today, but I think I can speak for the team in saying that it kind of shook us up a little bit — especially the guys that knew him, like Chavvy and myself, who were here the whole time he was here. I kept in touch with him for a couple of years after he left, but I hadn’t spoken to him recently. And it’s almost like you don’t have to. That’s how it is with friends. You could just pick up the phone out of the blue and pick up where you left off.

He wanted me to go to his celebrity poker tournament last year, but for some reason I couldn’t make it, and that’s something I’ll always regret now. That would have been a good last memory of him.

But I’m sure he’s happy now, and he’s in a good place. If it was up to him, he’d probably have us all take the tragedy lightly and not be all serious about it, because he was never that serious. It’s still unreal sad, though.

As far as baseball goes, being down 0-2, it’s tough. We’ve never been here before, 0-2 in an ALCS, but this team has certainly come back from some adversity this year, so I don’t really consider this any different. And I don’t think we should handle it any different. We shouldn’t panic, and we shouldn’t feel like we have to do anything but be ourselves.

If anything, we can learn from these two games and tell ourselves that if we’ve been pressing at all to just relax. The Tigers are obviously the favorites now, so let’s surprise some people.

I don’t know if we’ve been pressing as a team because I’m not in the heads of most guys, but I know I put a little too much pressure on myself in Game 1 to come out and be perfect instead of just being normal. If I’m just normal Zito, I pitch deep into the game like I normally do. But I think I fell into a trap that a lot of guys fall into, which is treating it like a totally different situation, totally different baseball, blah, blah, blah. No. It’s all the same. It’s just the surrounding stuff is more intense.

Having a day off now will probably be a good thing. It’ll be good to just chill out and go get familiar with Detroit and with their field, the cold weather, get settled, and have a whole new fresh approach for Friday.